The ups and downs of COVID

Like just about everyone else on the planet, the pandemic has thrown a real monkey wrench into my work schedule. However, it’s not all bad news. Things have been picking up recently. I was cast in a recurring role in the new series Good Sam on CBS. I managed to snag a few TV and film gigs last year, including a don’t-blink-or-you’ll-miss-me role in Star Trek: Discovery, a role in the Hallmark romance Lemonade Stand, a role in the miniseries Five Days at Memorial (slated for release early this year on Apple+), and a role in the third season of Umbrella Academy on Netflix.

On the writing front, The Human Race Theatre Company in Dayton, Ohio, has just announced that Marcia’s and my latest play, Deadline, will have its world premiere there in October. If you’re curious, we created a little blurb on the play that we posted on YouTube. You can find it here. Although live theatre is slowly coming back to life in this country, our primary focus at the moment is on other parts of the world. Our fourth play, Jack of Diamonds, has been translated into German for a production in Munich this spring. Also, our first play, Who’s Under Where?, is in the process of being translated into German. We look forward to a production in Germany once the finished translation is available. The annual production of our mystery, A Party to Murder at the Shanghai Modern Theatre went on a 16-city Chinese tour in early 2021, and was produced there again in the fall. Also, our fifth play, Something Fishy, has been translated into Polish and premiered in June of 2021 at the Och Teatr in Warsaw. We’ve also just received an inquiry about Who’s Under Where? from a theatre company in Bucharest.

In the absence of any other live theatre opportunities, however, we’ve had to move on to greener pastures for the time being. Marcia and I have converted our fourth play, Jack of Diamonds, into a screenplay, and we’re now hard at work developing a TV series. (More details about that anon). Both of us have built sound studios in our respective homes, so we’re able to do voiceover work remotely. This proved to be a wise move; a few voiceover gigs have materialized as a result. I’ve recorded four audiobooks since getting the studio up and running in the spring of 2020, and I did a lot of work on the video game Far Cry 6, which was released in the fall of 2021.

Having all this time off also enabled me to finish the first draft of my second novel, entitled The Shaming of the True. It’s a sequel to my first novel, the comedy/thriller The Poor Player. In this new one, our hero Harry Hargreaves is sent to St. Petersburg, Russia, ostensibly for a book signing of the Russian translation of his book, A Man of No Importance. However, Harry has another agenda on this trip. He’s been called out of retirement by CSIS to put a stop to the efforts of the Internet Research Agency, the infamous Russian troll farm that gained notoriety for meddling with the U.S. election in 2016. They’ve trained their sights on Canada now, and it’s become Harry’s mission to throw a spanner in the works at the IRA before they succeed in getting a Donald Trump clone elected as Prime Minister. Once again, however, ghosts from Harry’s past arise as he comes into contact with a sexy Russian spy he fell in love with many years ago on another CSIS op. 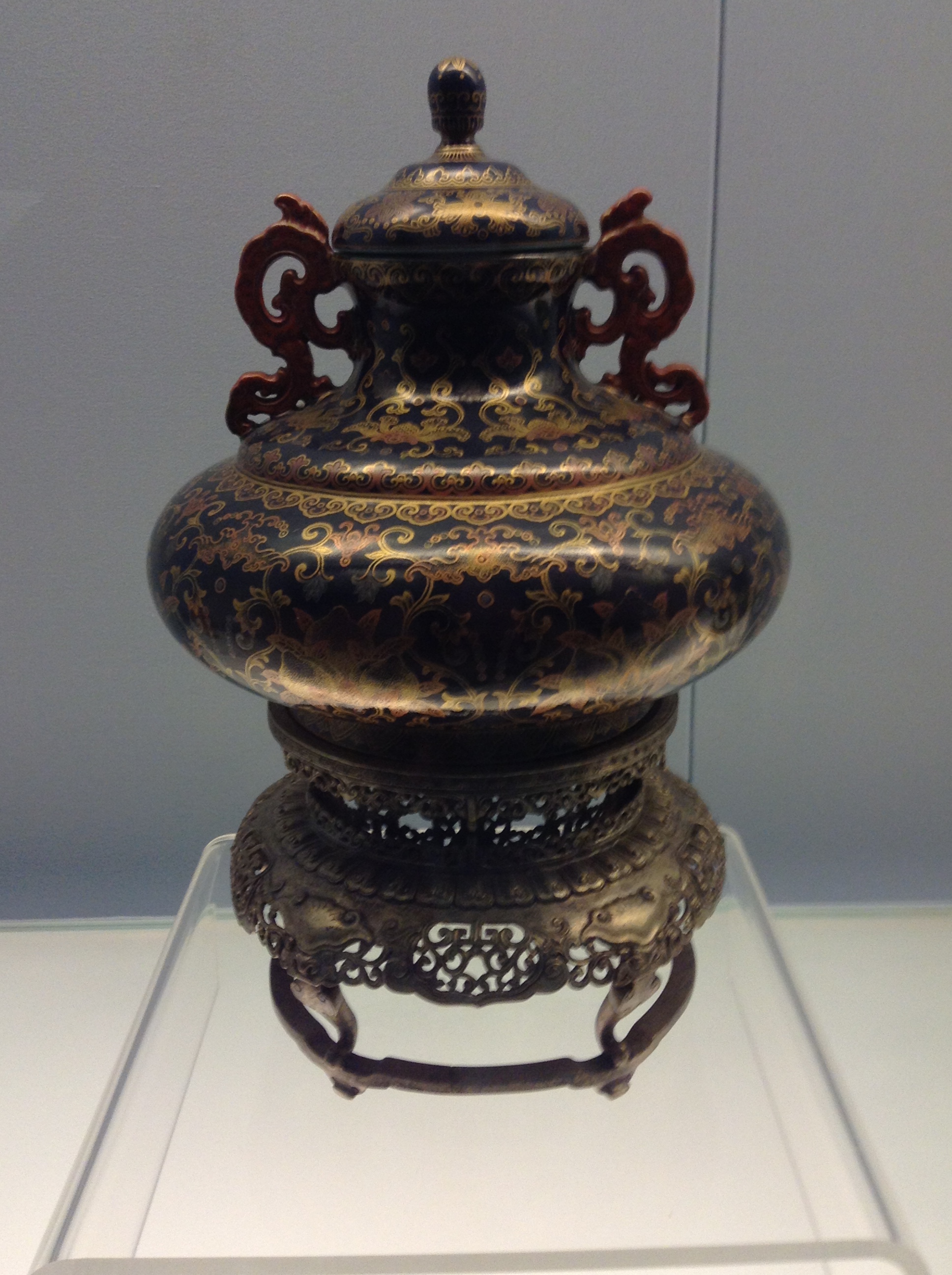 One of the many fine pieces of china we saw at the Shanghai Museum.

A few weeks after our first play, Who’s Under Where?, opened at Teatr Komedia in Wrocław, Poland under the title Damski Biznes, in late 2019, Marce and I flew off to China to see two productions of our murder mystery, A Party to Murder (or Halloween Games, as it’s known in Mandarin) in Shanghai and Shenzhen. It was an incredible visit, in many respects. 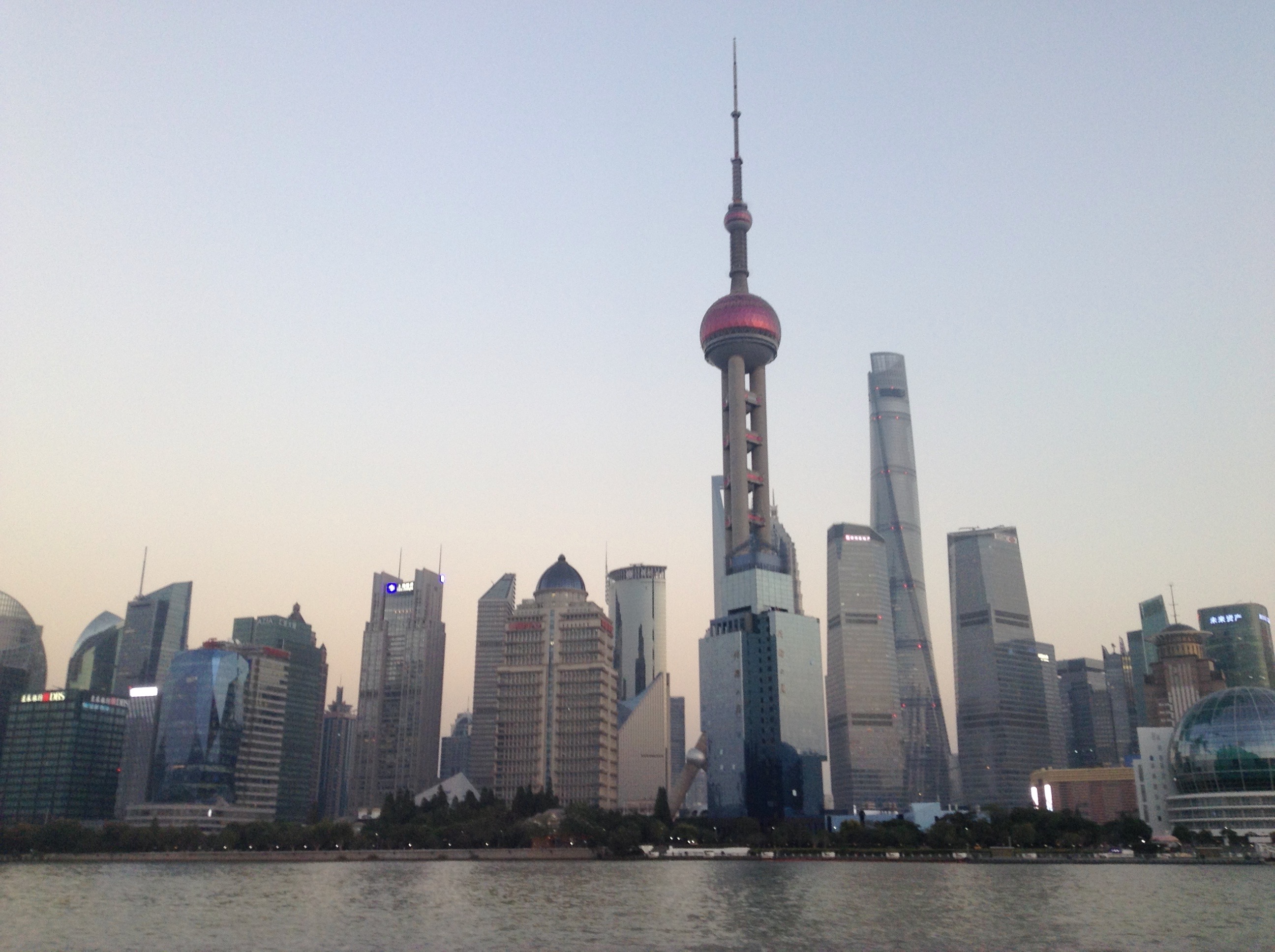 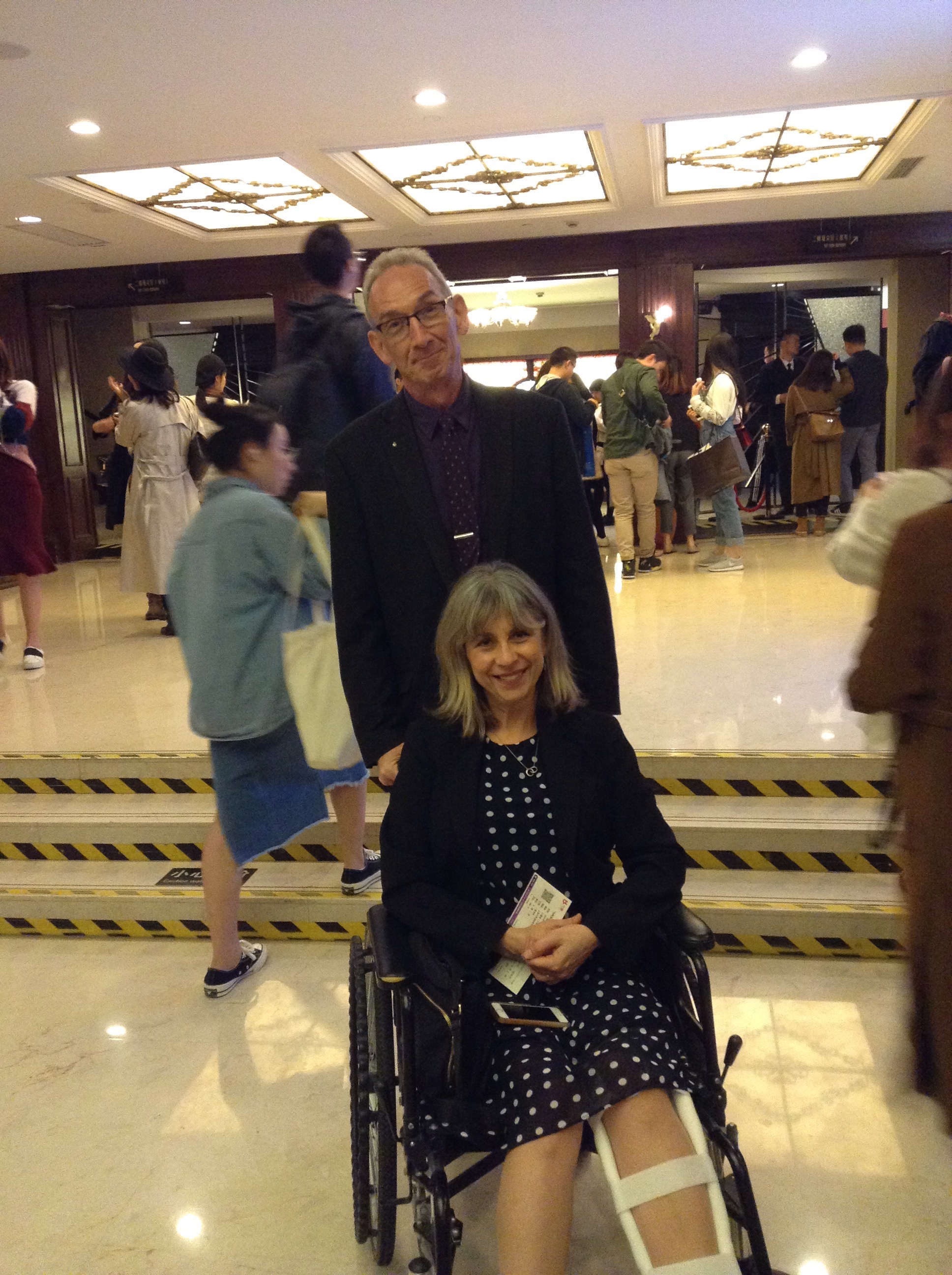 There was this incredible bit of bad luck, for instance. On our first day in Shanghai, while visiting Yu Garden, Marcia wiped out on a flight of very slippery stone steps and fractured her patella. However, we decided to make the best of the situation and soldier on. Here’s a shot of the two of us in Shanghai at the closing night performance of Halloween Games.
Our hosts could not have been kinder to us. Here’s a shot of Marce, her husband Ron and me at a sumptuous dinner in our honour, hosted by the creative team behind the Shanghai production. They are (from left to right) Yan Minyang (our primary liaison in Shanghai), Professor Fan Yisong (the man who translated the play into Mandarin) and the show’s producer, Mr. Zhang Yu. 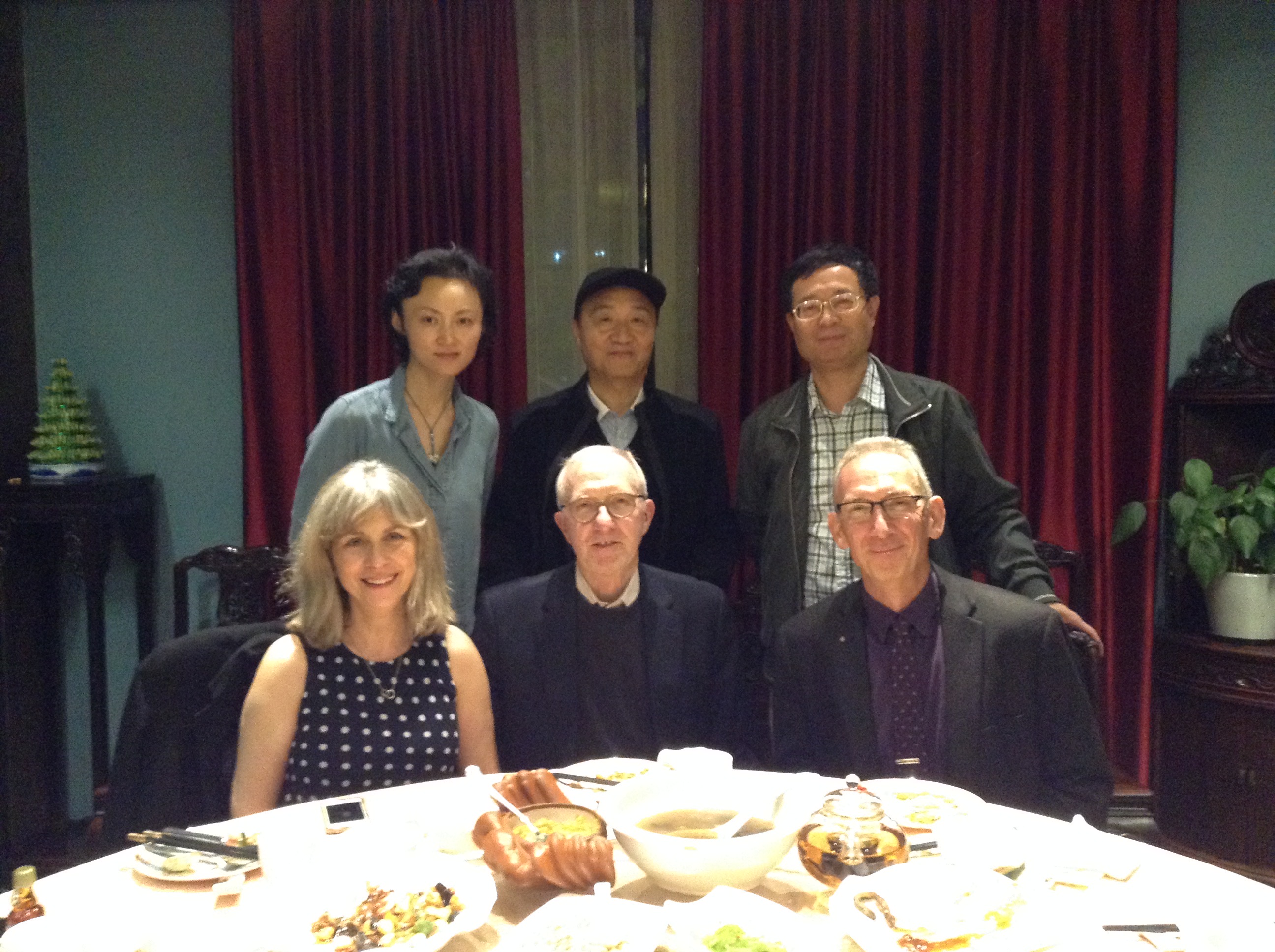 It soon became clear in the following days, however, that Marce’s mobility issues were more of a problem than we had anticipated; and so, Ron and Marce decided to fly home on the day we were to slated to fly to Shenzhen. Meanwhile, I continued on to Shenzhen alone to  see the production of Halloween Games there. 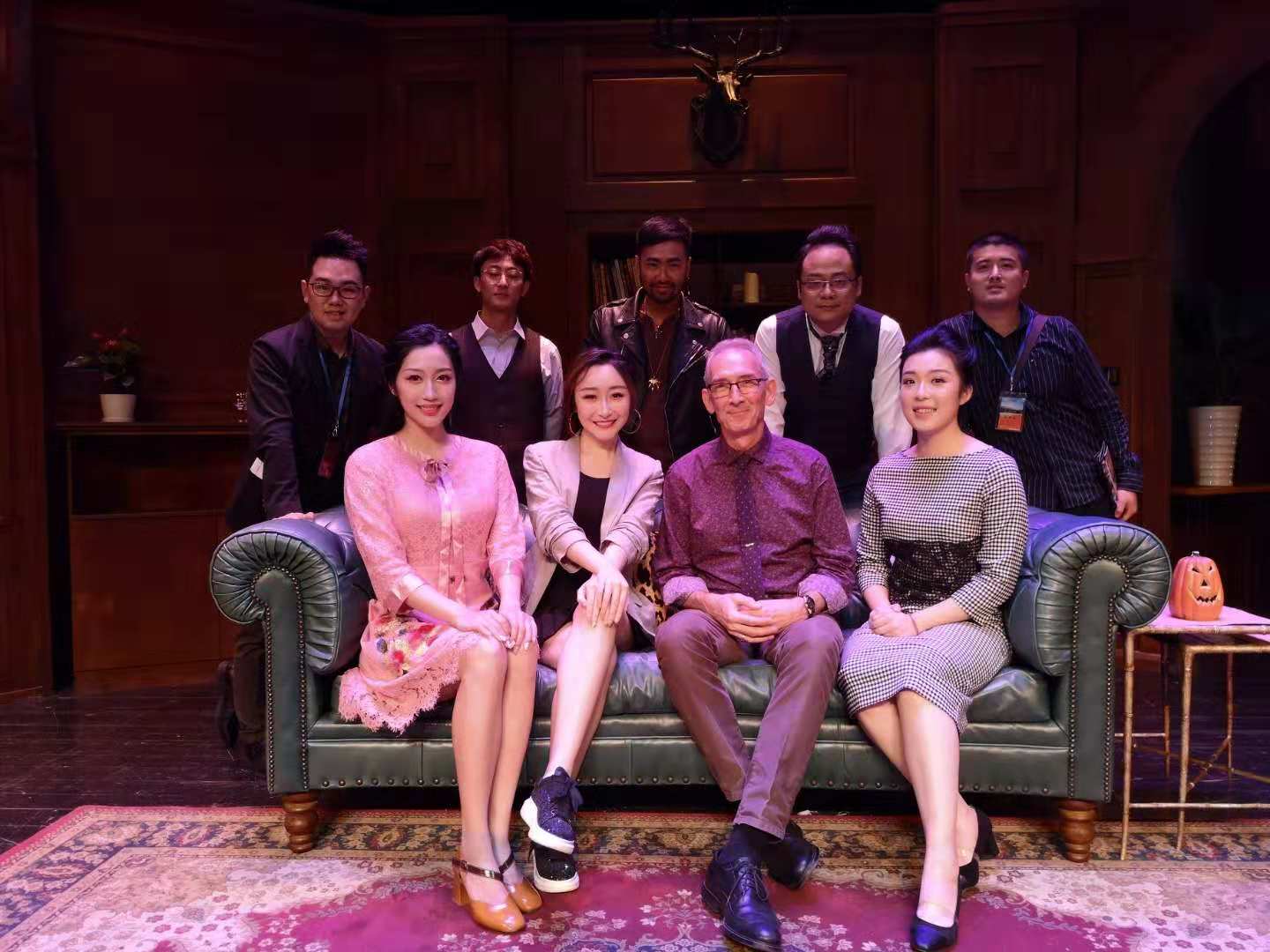 As with our hosts in Shanghai, the gang in Shenzhen spoiled me rotten during my brief visit. Here’s a shot of me posing with the producers and cast of the Shenzhen production of Halloween Games. 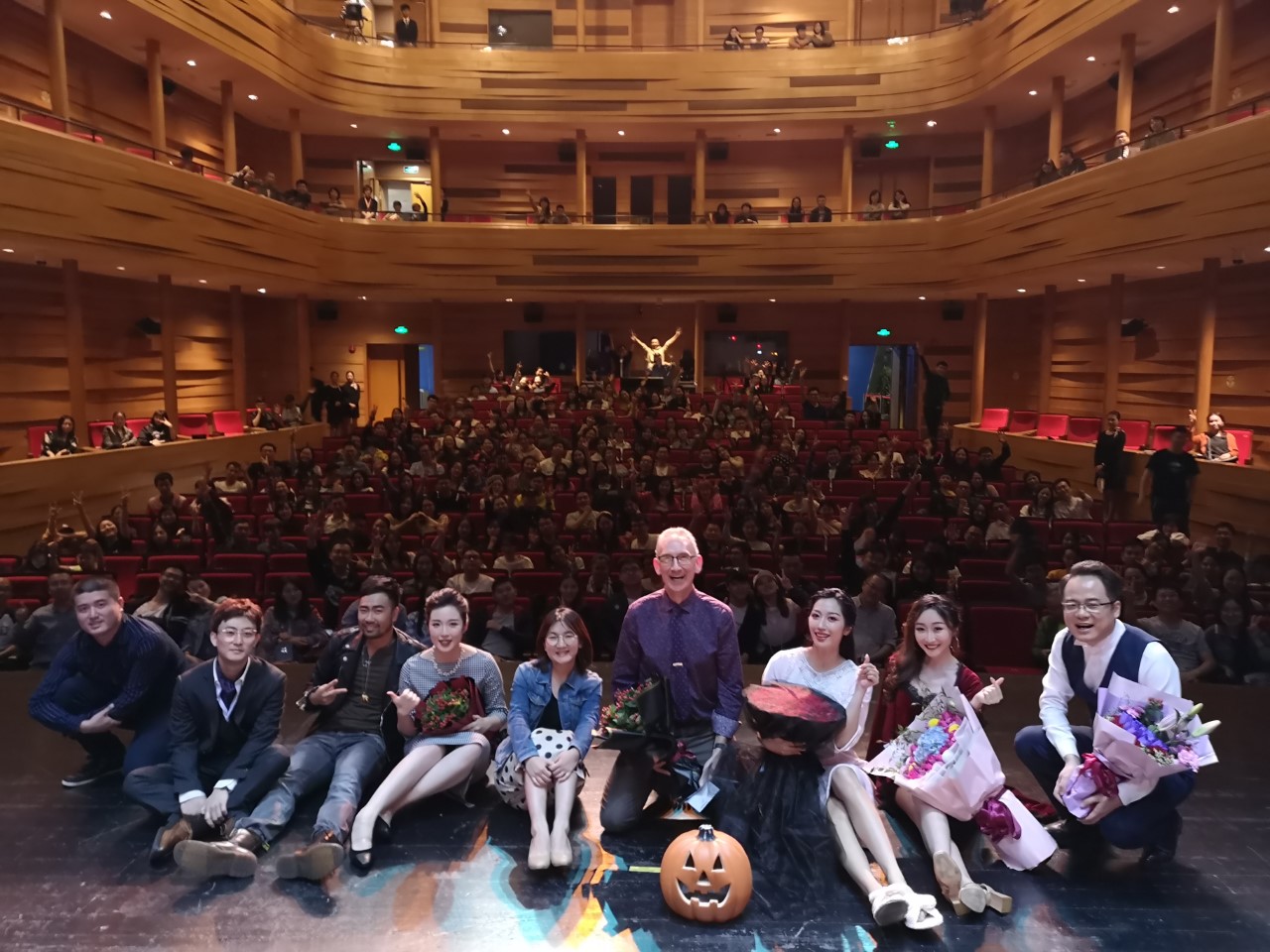 It was a terrific night of theatre. After the performance, we had an informal Q&A session with the audience, after which most of the cast and several others went trooping off to a local restaurant for some Chinese hot pot. A great time was had by all. 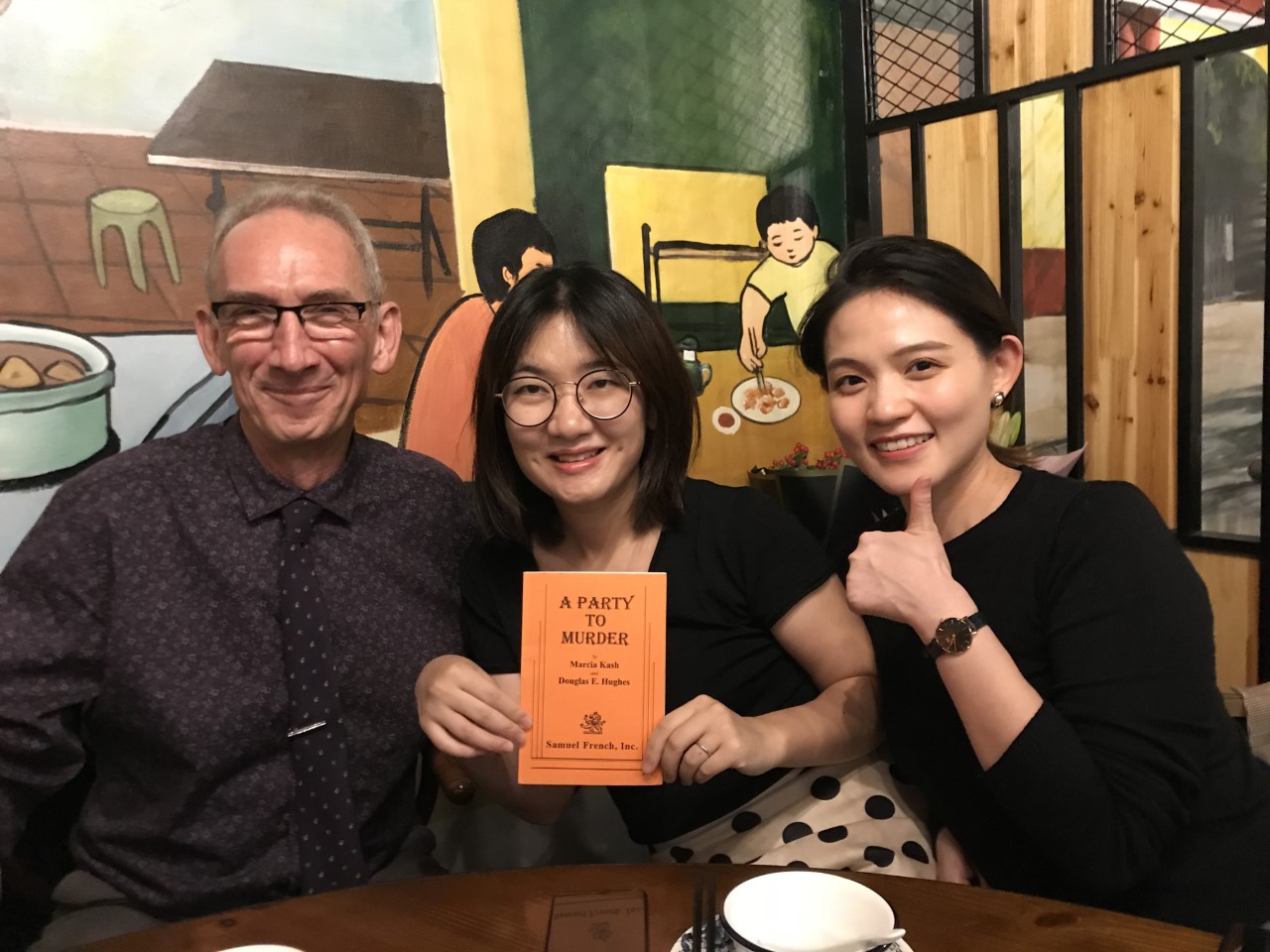 It was a wonderful visit, but like all such ventures, it was over much too soon. Marce and I are already making plans to return to China as soon as we can manage.

Meanwhile, Something Fishy was recently published by Samuel French, Inc. Fishy had its premiere production at the Lighthouse Festival in the summer of 2016.

On the acting front, Marce and I have teamed up once again as actor and director in a production of Agatha Christie’s The Spider’s Web at Theatre Aquarius in Hamilton, Ontario, running from September 21st to October 6th. A few weeks after that, we’re off to China! Meanwhile, Who’s? and Cooks continue to run in rep at Teatr Komedia in Warsaw. 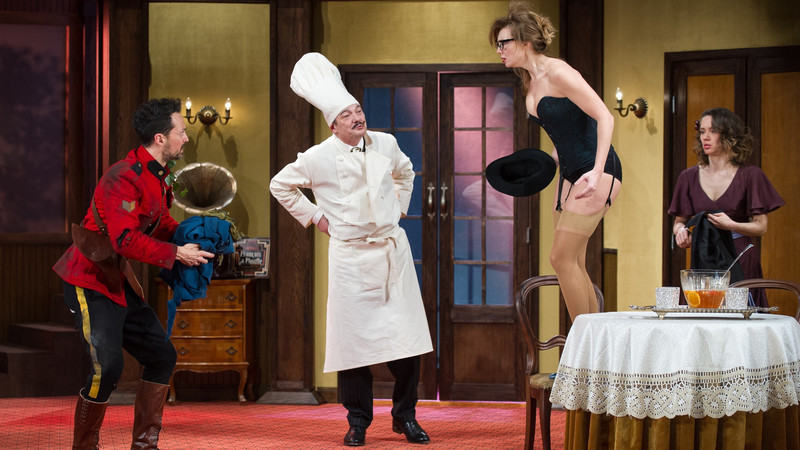 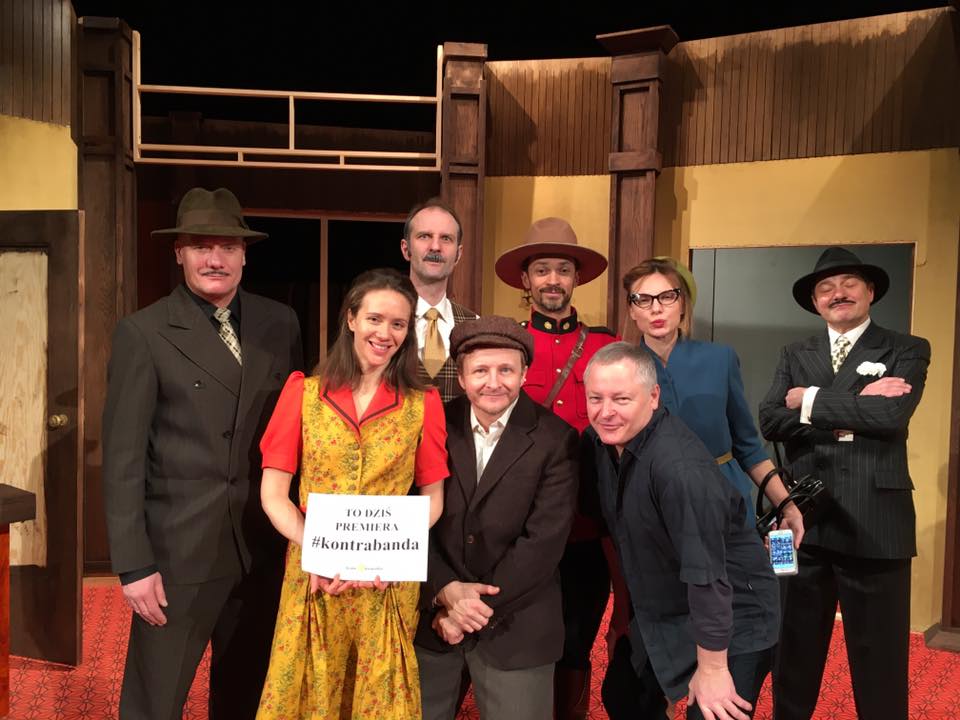 The cast and director of Kontrabanda

On Sunday, February 26, 2017, I attended the Polish premiere of Kontrabanda (Too Many Cooks) at Teatr Komedia in Warsaw, Poland. The opening was a huge success, with many curtain calls and rave reviews. 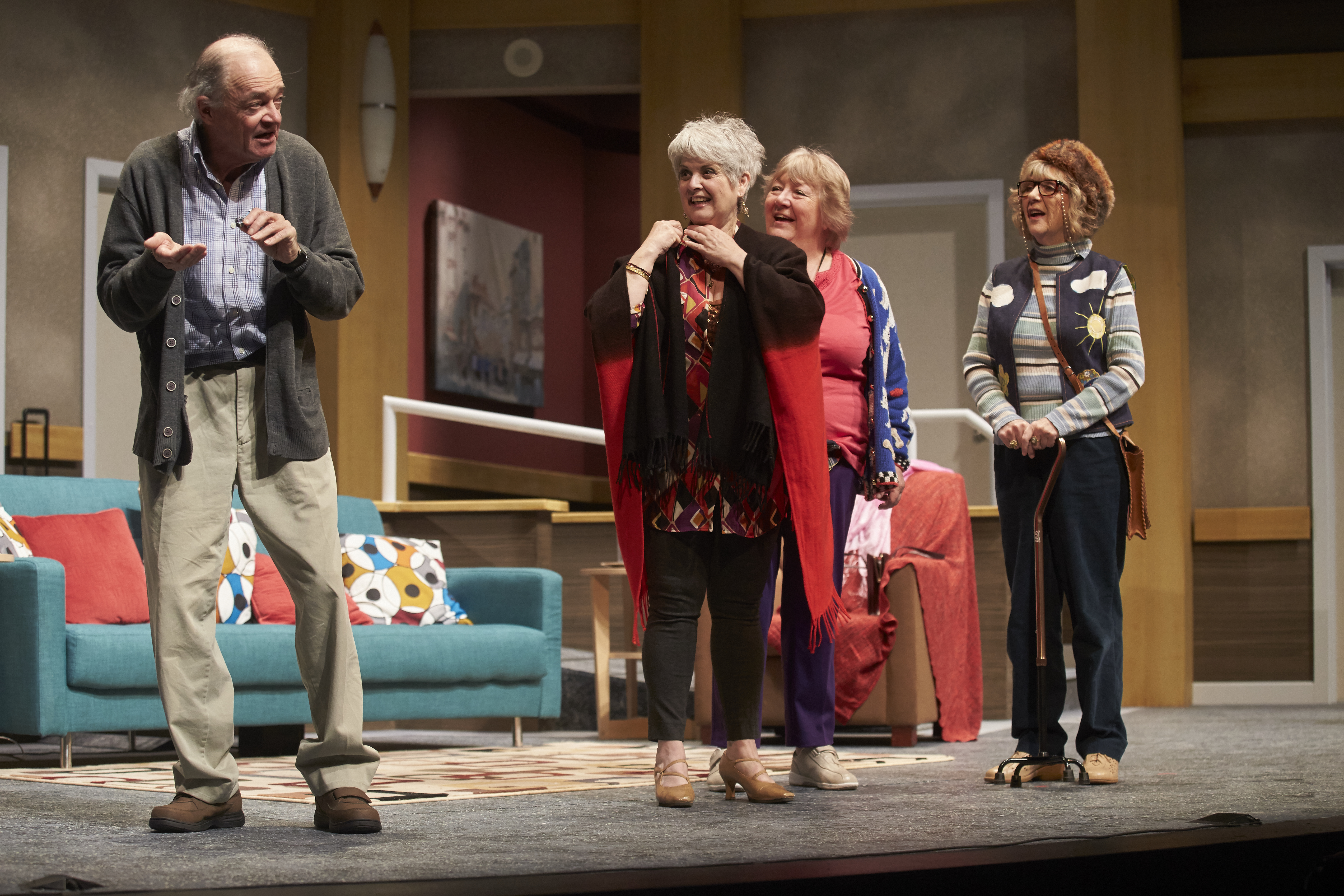 Here’s a shot from the premiere production of our fourth play, Jack of Diamonds, available through Samuel French, Inc. of New York. The premiere took place at Theatre Aquarius in Hamilton, Ontario, on October 30, 2015. Featured in the photograph are Ian D. Clark, Mary Long, Valerie Boyle and Wendy Thatcher. To see what the Hamilton Spectator thought of the show, click here. 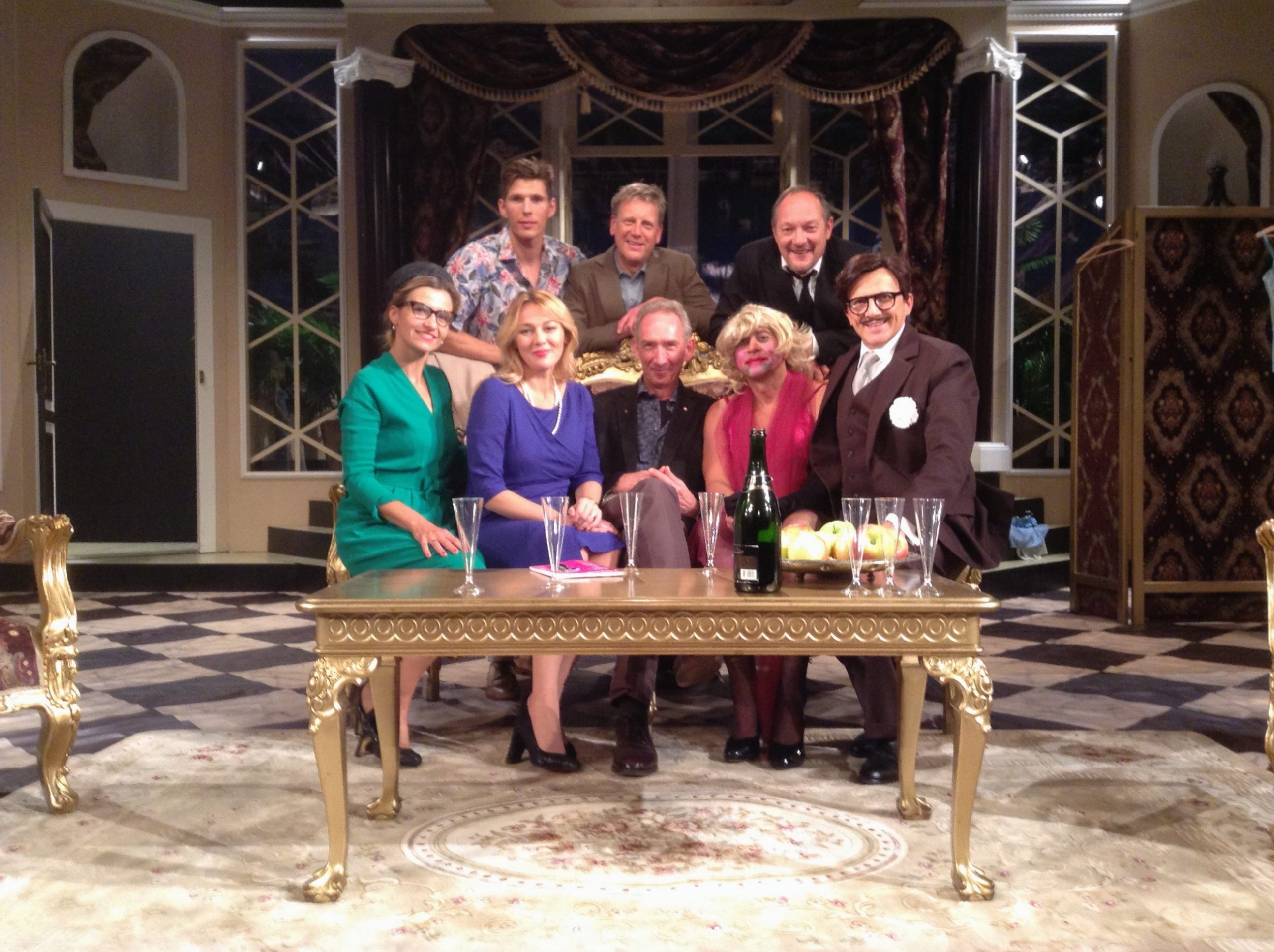 Here’s a shot of me with the cast of the first Polish-language production of Interes Zycia (Who’s Under Where?) at the Teatr Komedia in Warsaw, Poland. 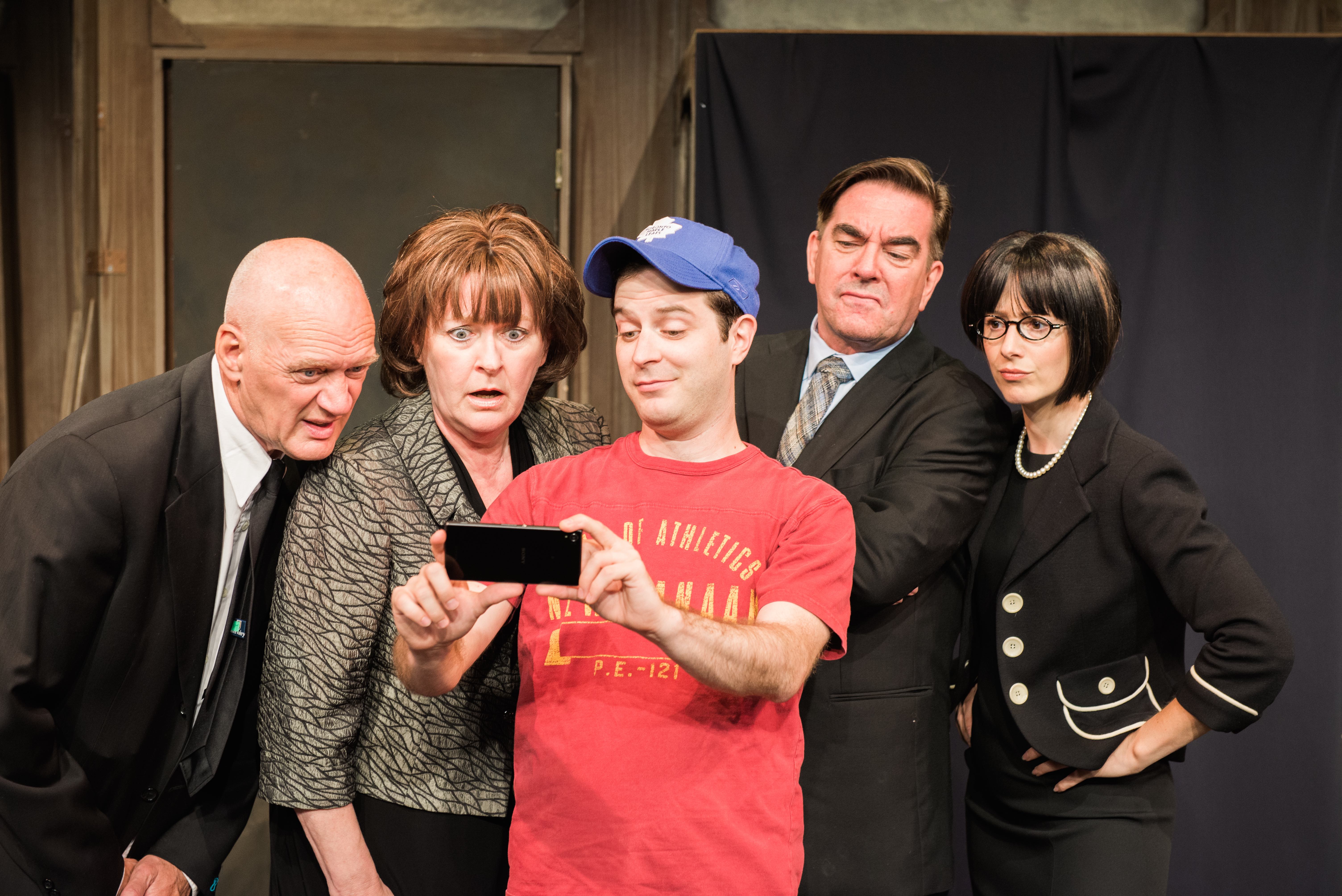 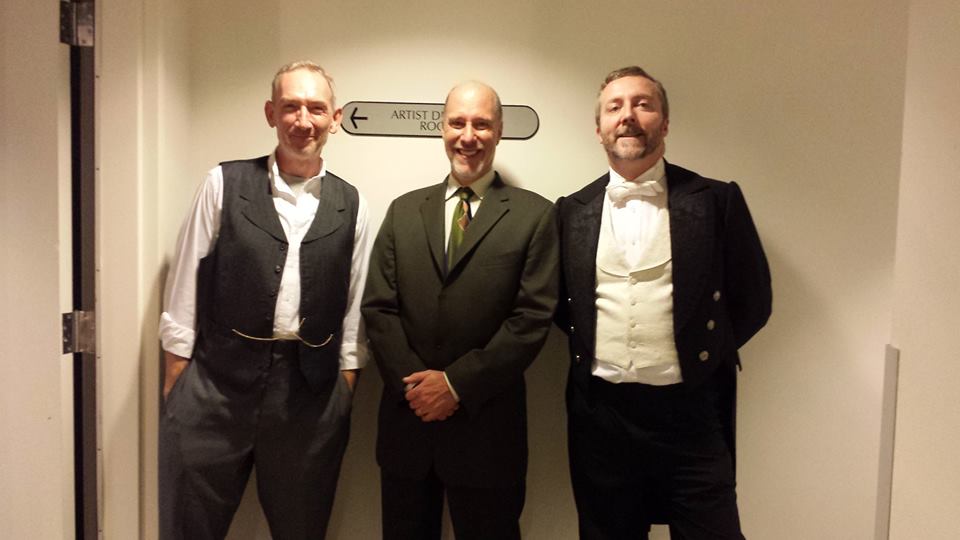 Me, Tom Allen and Ivan Sherry before our performance of At Sea for the Toronto Symphony Orchestra.

In the fall of 2015, for the first time, I found myself performing in something I’d written myself.  Along with CBC’s Tom Allen, I put together a couple of short plays for the Toronto Symphony Orchestra, both of which were performed during the interval of two of the programmes they were presenting at Roy Thompson Hall as part of their Decades Festival. The first piece was called  Debussy: At Sea, for which I was joined by the redoubtable Ivan Sherry. It was a short play consisting of two scenes (one a brief curtain-raiser performed on the TSO stage immediately prior to their performance of Debussy’s La Mer, and a second, longer scene that took place in the lobby during the interval) about Debussy and how he came to create this famous piece. Then on November 11th and 14th, in conjunction with the TSO’s performance of Mahler’s Symphony #4, Ivan and I did a second piece, The Talking Cure – a dramatization of the famous meeting between Mahler and Sigmund Freud in the spring of 1910.

The first French-language production of Marcia’s and Marcia’s and my third play, Too Many Cooks, had a hugely successful run in 2015 at Le Théâtre du Vieux-Terrebonne in Québec. Thanks to all the rave reviews and sold-out houses, it was extended a week, and after the run in Terrebonne, the show toured to Québec City and Gatineau. 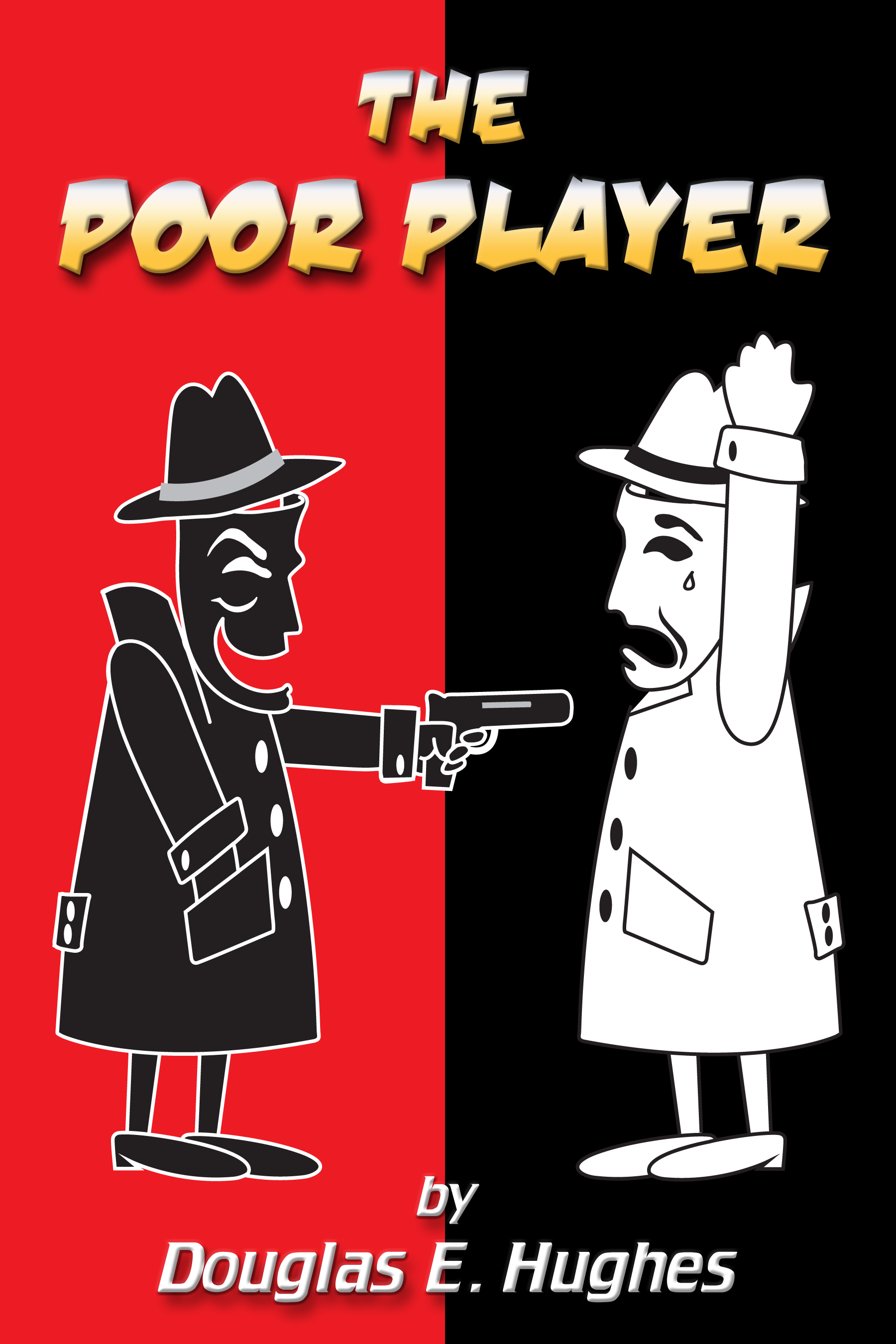 Here’s a mockup of the cover to my first novel, The Poor Player.

I’ve since finished the first draft of its sequel, The Shaming of the True.

You can find out a little bit more about The Poor Player here.